Curated By Michelle F. Bayuk for publication in Knowledge Quest

To understand the full extent of the storytelling success of The Looking Glass Wars, one must understand all the components of the LGW world. Here, author and creator Frank Beddor discusses how the “beyond the book” activity affects the story and success of the books. In addition to the two books already released in the trilogy, there are comic books, card games, an online game, and more associated with the world created for the book series. This interactivity between the written word and its extended life that results from the original storytelling is the focus of this article. –Michelle F. Bayuk, Editor

When I was asked to write this column for KQ, I flashed on the iconic librarians of my youth, card catalogues, and the special class we had to attend to learn the Dewey Decimal System. We were quizzed at the end of the class and I like to think I passed. While I have met many twenty-first century librarians since publishing The Looking Glass Wars (LGW), I still felt a twinge of stage fright in terms of how to write for a journal for librarians, so I went online and started reading some librarians’ blogs. Very quickly I learned that not only do librarians read, but they also write and are funny and post-modern and concerned and hopeful and at the end of the day like everyone else, tired and looking forward to a cocktail. So now I knew my audience on a more personal level and cast about for a possible topic. The suggested choices were my life, my writing process and philosophy, my influences, or “anything else of interest to school librarians and media specialists.”

I have selected anything else and titled it “The Mantra of Interconnectivity Meets the Mandala of The Looking Glass Wars Universe.” In the beginning, there was the word. In fact there were many, many words. I spent five years writing the first book of the trilogy inspired by Lewis Carroll’s Alice in Wonderland and Through the Looking Glass. But in between the words, I also discovered the images and the artists who could visually manifest what I was seeing in my mind’s eye as I wrote. My decision to engage artists early on in creating the characters and environments of LGW was a major step toward the interconnectivity that would eventually lead to the Web site, comic books, graphic novel, soundtrack, card game, and online game that have all sprung from the source work. This was not initiated as an overtly calculated plan but rather as an organic, creative, spontaneous progression that led to a very basic discovery: the bigger the universe and the more interconnected, the more likely it was that someone, somewhere would get interested and begin to read.

The multiplatform expression of the themes, art, and storytelling of LGW, whether in the parallel story of Hatter M’s comic book adventures as he searches for the lost princess, in the online game, or as a song from the soundtrack sent as a link by a friend, are all an open invitation to further adventures with characters and environments that have caught a potential reader’s imagination. To get someone to read, you do not necessarily have to hand them a book. You can show them a piece of art that inspires them to want to know more about its origins and meanings or you can provide the opportunity for them to create their own card soldier army in an online game or you can play a song from a soundtrack to create an aural world that beckons them in for further exploration.

Because The Looking Glass Wars is a novel set in two dimensions, our world and Wonderland, I wanted to do as much as possible to help the reader fully experience what I’d envisioned, so I decided to go beyond the confines of the written page. In the spirit of a graphic novel I created an aural novel by producing a soundtrack much the same as a director would for a film. Because readers will be confronting unknown dimensions in the book, I wanted to extend the mental dimension of the page to the auditory––hoping that the world of Wonderland and its’ denizens would become that much more sensory and real. I didn’t predict that booksellers would play the soundtrack in their stores to catch the ear of potential readers. To me this is exciting evidence of the value of interconnectivity.

All of the above brings me circuitously to the basic concept of the LGW universe that states all imagination flows from Wonderland to our world as a gift to be used as we will. I believe there is a powerful energy to words, particularly the written word. Words that flow from the font that is LGW have stimulated other imaginations, inspiring not only me, but other artists, musicians, game designers, publishers, reviewers, and especially readers. But while artists and professionals are career inspired, the readers and fans who search me out at comic book conventions and readings to show me their art or tell me how they are designing a costume to wear as their wedding gown based on the garb of Her Imperial Viciousness Queen Redd, are responding purely to the flow of imagination inspiring them to create their own part of the mandala that is the LGW universe.

Wonderland constantly projects upon our world––in what we have come to call inspiration, creativity, and dreams. These invisible influences come mostly to people who are open to receiving them: artists, dreamers, inventors, and of course, children. How open you are to Wonderland’s unseen influences will determine your level of imagination. Children are wide open until they are told to grow up and be like everyone else. This societal pressure leaves only a small percentage of the adult population still believing in the unseen world and open to its endless gifts. How long could this world continue to turn if not for the heroic efforts of a select, literate few?

At the beginning of the Hatter M graphic novel I thank the scholars, antiquarians, reasoners, logicians, rationalists, and knights errant who have made this book possible. I hope it is clear that I am referring, of course, to librarians. Thank you for your heroic efforts to keep the gates of consciousness open so that imagination can continue to flow to all who enter your realm in search of the unknown.

Frank Beddor runs Automatic Pictures and was the producer of the hit comedy There’s Something About Mary. Before that, Beddor was the first International Ski Federation World Cup Champion in combined freestyle skiing. His risky skills on the slopes led to a job performing the ski stunts in the cult classic John Cusack film, Better Off Dead. The author of the New York Times bestseller The Looking Glass Wars and its sequel Seeing Redd, Beddor lives in Los Angeles, California. 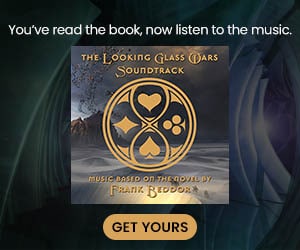