Friends and Foes of Alyss Heart In Wonderland

Inside the world of The Looking Glass Wars:

While Alice Liddell (or is it Alyss Heart?) has no shortage of antagonism to contend with during her time on earth in Victorian London, she will find upon her return to Wonderland there is a colorful cast of both friends and foes waiting to make her (re)acquaintance. As she rediscovers her royal roots and ascends to the throne with the might of her Imaginative powers these unique characters shall be the shoulders she stands on, the friends she walks beside, and the adversaries she must surmount.

Daughter of Hatter Madigan and Weaver, Molly is a halfer (half Milliner, half civilian). Like all halfers, she bears the mark of her birth just below her left ear: a small “h” tattooed in indigo blue ink. Born in an Alyssian camp in the early part of Redd’s reign, she’s thirteen years old when Alyss Heart, long thought dead, returns to Wonderland with Hatter, who’s disdainful of halfers and doesn’t know that he is her father (neither does she).

Undisciplined in temperament, Molly is remarkably skilled with her signature weapon—a homburg she can flatten into a knife-edged disc. Alternating between defiant pride and self-doubt on account of her halfer status, she’s eager to prove herself in and out of combat. When it comes to Alyss fulfilling her destiny, Molly is nearly as integral as Hatter, who, learning that she’s his daughter and recognizing his former prejudice against halfers as stupid, wants nothing more than to be with her.

The childhood friend of Hatter Madigan who, in adulthood, is the secret love of his life and—unbeknownst to him for years— the mother of his child. Intelligent, empathetic, circumspect, Weaver delays telling Hatter about her pregnancy, knowing how guilty he feels about breaking Millinery protocol by loving her, a civilian (not of Milliner blood). Only when she’s not going to be able to physically hide the truth for much longer does she decide to tell him. Unfortunately, she never gets the chance.

During Redd’s coup, Hatter jumps into The Pool of Tears with Princess Alyss, emerging on Earth unaware that he’s to be a father. During his absence, Weaver gives birth to a daughter, Homburg Molly, in an Alyssian camp. An alchemist of great ability, Weaver is eventually abducted by the king of neighboring Boarderland, used as a bargaining chip in certain negotiations, and eventually killed while protecting her daughter.

Princeling of the Diamond family. Once a spoiled child with a great love of pretentious wigs and a vast superiority com­plex, he is now a spoiled, entitled adult. Jack’s conniving mind serves him well in Redd’s Wonderland—a society where only the shrewdest, most opportunistic, most selfish, and least loyal to friends flourish. He doubles his family’s fortune by pretending to be, in secret, an Alyssian while publicly remaining a Redd loyalist.

One of his methods for increasing his coffers (others are more labyrinthine): he sells supplies to the Alyssians, which Redd allows him to do so long as he provides her with intel regarding their military maneuvers. But Jack always leaves out important details, since if the Alyssians are exterminated, he’ll lose a most profitable revenue stream.

The first friendly person Alyss meets in London, a boy about her age wearing grey breeches patched at the knees and thighs, an overly large frock-coat and cracked leather boots with no laces. As Alyss introduces herself as Princess Alyss Heart of Wonderland, he introduces himself in kind as Prince Quigly Gaffer of Chelsea. He offers her aid and the promise of dry clothes because, amongst other things, she seems a bit brighter than a everything else around her.

Of the band of children that he introduced her to, she thought he was the nicest as he made an effort to keep everyone’s hopes up and he was attentive to everyone. His parents were murdered when a couple of thieves set upon their coach, he would have been killed as well if he hadn’t escaped while they were taking the rings from his dead mother’s fingers. He’s been living on his own, mostly on the streets of London ever since.

When Alyss makes a flower sing in his presence, he gets the idea to turn that trick into a show to earn them coins on the streets with which to buy food. Unfortunately, since he thinks of it as a trick and not Alyss using the power of her imagination, Quigly doesn’t understand when, after a while, she isn’t able to do it anymore. …

Alyss is pinched when they’re stealing food from a shop and Quigly sees her in trouble, but for whatever reason chooses just to keep on running and save his own skin rather than risk saving her as well. It’s the last time she sees him. Until Alyss turns twenty.

Boarderland’s sovereign. A neighboring kingdom of Wonderland, Boarderland is a sprawling place with large, unpopulated tracts between nomadic settlements. It’s a tribal country, and except for clashes, every tribe is self-contained and, to a small extent, self-governing. Arch lets tribes do what they wish in “trivial matters” such as healing rituals and marriage ceremonies. …

He even allows them to choose their own leaders so long as they acknowledge him as their king and abide by certain edicts, most of which have to do with a male’s superiority over females (he doesn’t believe in queendoms).

Arch was Redd’s lover when she was an unruly princess, and the two maintain a flirtatious rela­tionship throughout Redd’s reign as Wonderland’s queen. Arch doesn’t know that he was responsible for Redd’s pregnancy as a teenager, which finally caused her to be removed from offi­cial succession. When it comes to political machinations, Arch would give Machiavelli a run for his money.

King Arch’s top bodyguards. Prodigies when it comes to tradi­tional modes of combat, though they don’t limit themselves to the traditional. When Ripkins flexes his fingertips, glinting saw teeth push out of the skin in the exact patterns of his finger­prints. Without a wince of emotion, with hands moving as fast as Hatter’s spinning blades, he can reduce anything to shreds, after which the saw teeth sink back into the skin of his fin­gers.

And Blister? Well, let him press the tip of his pinkie finger against the exposed skin of your forearm and you’ll clench your entire body, sweat profusely, and your entire arm will blister. It will be worse, much worse, if Blister touches you with, say, his index finger or—God forbid—an entire hand. Both Ripkins and Blister are martial rivals to Hatter, and their periodic bouts with him quickly become that of legend.

An artificial race created by Redd that have enhanced sight, strength, and speed. Indistinguishable from ordinary Wonderlanders except for the implants of reflective colorless crystal in their eye sockets. They were built for hand-to-hand combat and were typically employed by Redd to patrol the Crystal Continuum and annihilate suspected Alyssians during her tyrannical 13-year reign in Alyss’ absence.

Following Redd’s eventual defeat at Alyss’ hands, Arch sends his bodyguards into the Chessboard Desert to find and capture a Glass Eye which he then successfully reverse-engineers. A factory is then constructed in Boarderland and a good deal of Glass Eyes are manufactured, the nefarious purpose of which is not hard to guess when speculated upon with knowledge of King Arch’s usual conniving. 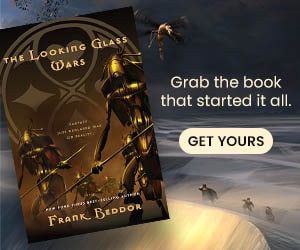 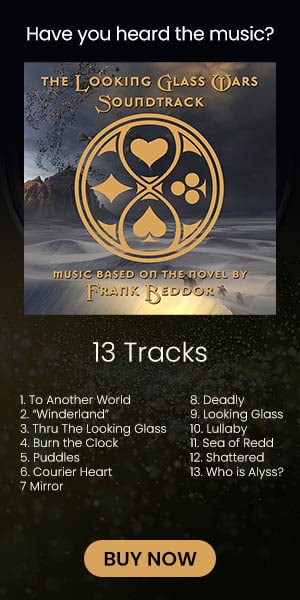