Lewis Carroll’s writing prowess allowed him to craft Wonderland, a world whose very name conjures vivid imagery in the mind’s eye.  The unique realm was so singular in its appearance that the author had to invent a few words, and augment a few more, just to capture a fraction of his own creation (though of course the wise among you readers will know he was merely a conduit for the truth behind the fiction as told to him by Princess Alyss).

Many find words on a page to fail at conveying the full magic of Wonderland. Artists of every stripe use the template Carroll laid down to express themselves. Among the multitudes of media, Alice in Wonderland-inspired comics and graphic novels stand out as incredible adventures. Here is a collection of some of the most inventive reworkings and remixes of our favorite story not all in the Disney universe:

Templesmith’s iconic style brings Hatter to life as he rubs shoulders with some of history's greats (meeting Jules Vern and Abe Lincoln among others). Following the glow of imagination is the guiding principle for Hatter, and his only hope of tracking down his lost liege. This “reimagining” of Alice in Wonderland is both identifiably Alice, and yet uniquely its own.

ALICE EVER AFTER (BOOM! STUDIOS)

A grimy and harsh vision of Alice's adventures on Earth, this graphic novel iteration of the Wonderland story presents an addiction-burdened Alice coping with a harsh London underworld as her obsession with the realm beyond the looking glass could be her respite or her ticket to the asylum.

Through the Victorian London fog, familiar faces re-emerge as the colorful crooks and naughty nobility of the mundane realm of Earth. Though the eyes of Alice both worlds start to bleed together like staring into the Pool of Tears after too much flugelberry wine.

If you have the nerve and interest in tales from the underbelly of society, then this tale of Alice through the gaslight and London fog might just give you some perspective on the true difference between that realm and our great Wondertropolis.

From Zenescope, the creators of the "Grimm's Fairy Tales" universe, famed (or infamous) for its mature re-imaginings of classic fairy tale worlds as well as its buxom rendition of their heroines.

Here we see a familiar tale of an older Alice/Alyss, her mind and outlook on the world influenced by her childhood experiences in Wonderland only to return to the mad world once thought to be a mere fantasy.

Though not nearly as horror-genre oriented as the previous entry, this rendition does live up to its namesake with the very frank depictions of violence and other “adult themes” in the world of Wonderland.

Though the characters and kingdom are clearly inspired by Mr. Carroll's stories, the “politics” of this comic series does hit close to home. As the White Rabbit and Mary Ann have to contend with a vengeful Queen (of the Redd variety) who suspects the pair of harboring sympathies for the absent Alice.

Fanciful but not lacking teeth, this comic book series offers a unique glance into the wondrous adventures of Wonderland's residents both big and small, great and terrible.

Set in a bizarre boarding school, this graphic novel follows three young girls: Alice (Alyss), Wendy, and Dorothy meet years following their inter-dimensional travel to realms beyond mere Earth imagining. [Perhaps the Pool of Tears can lead to worlds that we in Wonderland have yet to fully imagine.]

The author Andy Weir is of The Martian fame, while the artist Sarah Andersen is the creator of the popular web-comic series Sarah's Scribbles. With characters from the lands of Oz, of Neverland, and of course our own Wonderland, there is no shortage of madcap characters and adventures on every page.

From famed graphic novel scribe and possible wizard, Alan Moore, and illustrated by underground comix legend Melinda Gebbie; this tale of Alice's adventures brings the familiar heroine in to the same “real world” Earth shared by Wendy of Neverland and Dorothy of Oz.

However, unlike the previous entry on this list, the creators of this (very) graphic novel had much more "adult adventures" in mind. While not something for younger audiences, there is a lot to be gained from this story as it conveys just how much these young women shaped the imaginations and personal lives of so many in such profoundly intimate ways.

It would be recommended that one reads this work with a full understanding of the creators' intentions in light of the sometimes awkward, sometimes scandalous, and sometimes shocking nature of these human experiences.

Written by Landry Walker with art by Kieth Giffen & Bill Sienkiewicz as part of the greater Detective Comics Batman universe, the Joker's Asylum series present individual tales of some of the Caped Crusader's most infamous rogues.

This comic book details the origins of Batman's Mad Hatter, a criminally minded man by the name of Jarvis Tetch who would be obsessed with an Alice of his own as well as bizarre millinery-based weapons and mind-controlling hats.

Perhaps what makes it most interesting is that we are very aware in the format of this story, all the information, all the tragedy, is being fed to us via the unreliable words of a madman whose dark imagination would make Queen Redd shudder in disgust.

ARKHAM ASYLUM: A SERIOUS HOUSE ON A SERIOUS EARTH

Continuing deeper into the realm of Gotham City, we see Jarvis Tetch held within the infamous Arkham Asylum. While this Mad Hatter is most certainly a more vile personality than some of the other milliners seen in this list, he is but one card amongst a whole deck of disturbed versions of a familiar face.

Deeper still, the whole structure of this one-off graphic novel feels very much like the dreamy dive into the darker imaginations of Batman and his villains, a rabbit hole of the hero's own. Not lacking in grit, the story takes familiar notes of Carroll’s original world, and twists them into a scenario only Batman could contend with.

What a weird and wonderful list of Wonderlands.  We have seen colorful panels paying homage to the original tale crafted by Lewis Carroll, and the evolution of that story as Earth writers and artists begin to imagine Alyss and Wonderland closer to their true selves.

Marco Arizpe graduated from the University of Southern California and The American Film Institute with degrees in filmmaking and screenwriting. His brand of borderland gothic horror stems from his experiences growing up in a small town where Texas and Mexico meet. Culturally steeped in a rich history of all things terrifying, Marco never fails to bring forward indigenous folklore in contemporary and fresh settings. 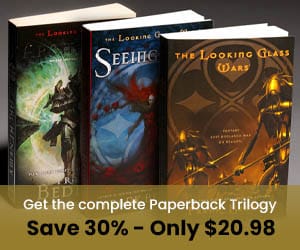 This is How They Found the Music for the New Alice In Wonderland Project - The Looking Glass Wars
The Alice in Wonderland World Is A Fantasy: But This Isn't...
The Royal Recipes of Wonderland: Baking Recipes You Won't Believe
The Mad Hatter prevails! Author Frank Beddor sizes up an icon
Pop Culture References To Alice In Wonderland You Just Can't Miss
1 2 3 … 11 Next »