Bestselling author Frank Beddor knows the landscape of Wonderland as the creator of the "Looking Glass Wars" series of novels and the "Hatter M" graphic novels. Today, as Disney basks in the glow of a $210-million opening weekend of Tim Burton's "Alice in Wonderland," Beddor considers the pop-culture persistence of the Mad Hatter.

Riddle: When is a Hatter NOT Mad?

I love the smell of madness in the morning. The popularity of "Alice in Wonderland" has endured for nearly 150 years and been read by generations, so it understandably captures a large part of our shared imaginative history. And it’s not just books, film and television that riff on Alice and Wonderland, but music, clothing lines, nightclubs, games, toys etc. etc. etc.

Across the pop culture spectrum, from artists and musicians to ad agencies and Internet moguls, tastemakers are tapping into our shared imaginative history of the Alice iconography to capture their audience. Although Alice certainly gets top billing, there would be a strong argument for an even deeper psychic attachment to … the Mad Hatter.

It seems Alice gets the girls, the dreamers and the fairy-tale fanatics, but the Mad Hatter attracts a more raffish contingency of nose-thumbing social heretics who see the character as an icon of anti-authoritarianism and sartorial splendor.

Despite his moonstruck popularity, history is somewhat bent on the origin of the Hatter and his infamous mental state. The Hatter was a fictional character introduced at a tea party in Lewis Carroll's "Alice's Adventures in Wonderland." And although he was almost immediately referred to as the "Mad Hatter," he was never called by this name in Carroll's book.

The Hatter is introduced in Chapter VII, "A Mad Tea-Party," in which he asks Alice the famous riddle: "Why is a raven like a writing desk?" When Alice gives up, the Hatter admits he does not have an answer himself. How mad!

Minstrel outlaw Tom Petty donned the Wonderland madman’s costume for his 1985 music video "Don’t Come Around Here No More" and Tom Waits sings ”mad as a hatter/thin as a dime.” Bars and pubs and watering holes around the globe proclaim themselves to be an outpost of madness by adopting the name of (arguably) history’s most mad character. Racehorses and restaurants … a certain inmate of Arkham Asylum … all mad as hatters.

It seems from all this that the general populace is actually quite dazzled by all things MAD.

s it the social freedom that the Mad appear to enjoy? Freedom from petty constraints, the herd state and dress codes can be a lure to many individuals. But not to the timid. The timid seem to me to be anything but mad, which is why I so vehemently disagree with the consensus by some that the Mad Hatter’s mental state was induced by inhaling the mercury fumes that were part of the trade of 19th century hat makers.

Symptoms of mercury poisoning include excessive timidity, diffidence, increasing shyness, loss of self-confidence, anxiety, and a desire to remain unobserved and unobtrusive. WHAT? Nothing MAD about all that. So then… when is a Hatter NOT Mad?

When he is FURIOUS.

With full disclosure I must admit to a strong alliance with a Hatter whose "madness" manifests as an obsessive, single-minded, all-consuming mania to traverse our world in search of Wonderland’s lost princess. Many of those he meets along the way certainly consider him to be mad. What is this man in the Hat babbling about? A lost princess named Alyss? His loyalty to White Imagination? A puddle where no puddle should be! Lock him up!

But in between the timid, the toe-the-liners and the practical observers of life, he meets those who dare to believe him, who sense the truth of his mission and the beauty of his cause. And to all of those … I must tip my hat. One last riddle: Why must individuality be labeled a disease? Answer: Because it is dangerous. 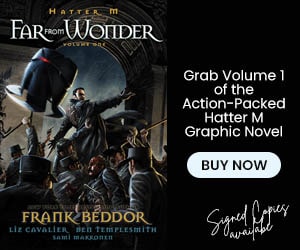